Hard to believe it's all got to come together in nine days. Everything is on schedule so far, though it's at a bare-bone stage right now where that doesn't seem possible!

Actually, the kitchen installation is being moved ahead to the Monday (two days before move-in) instead of this Friday, which is the supplier's fault (i.e., us!), not Tercera's. Hahaha [hysterical laughter]. 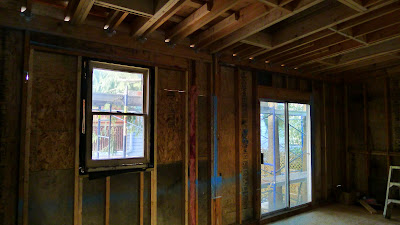 In the next couple of days, the wiring will be done and the rough-in plumbing.

Then the walls will be done: our wonderful crew will be doing traditional plastering (hence, the cross-border shopping to find a particular plaster our guy wanted). I think it's called "veneer plastering," in which they do a skim coat of plaster over drywall so that it matches the original lathe and plaster. And -- here's the thing -- does not require sanding! 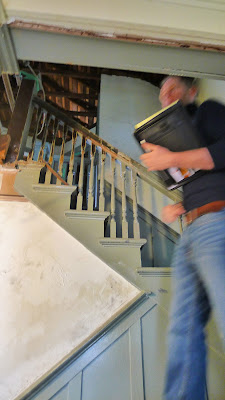 We are so lucky to have Keith McGill of Tercera on our team: from his days of restoring heritage houses in Dublin (where the laws about conserving heritage are much stricter), he brings a wealth of knowledge about how to modernize our house while preserving its character. Excuse the blurry photo.
Posted by Unknown at 11:05