It's amazing to watch this space -- which used to be a little scullery off the kitchen -- become a bathroom! The tile is amazing! 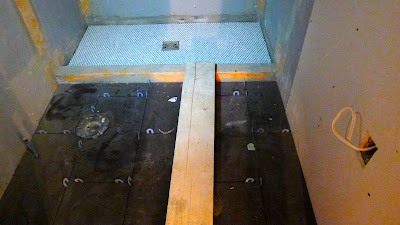 Black tiles on the floor (large format, same as kitchen), "antique white" small subway tiles on the walls, and penny rounds on shower floor and in feature (behind shower hardware) and inset. 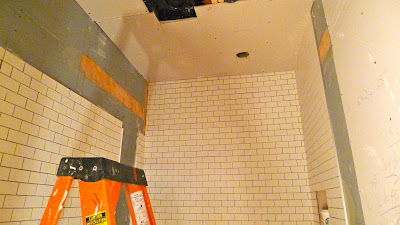 The tiling guys, like all the subcontractors, are amazing. Smart, exacting, dedicated to their craft. They got the level out for every single row of this floor-to-ceiling subway tile! 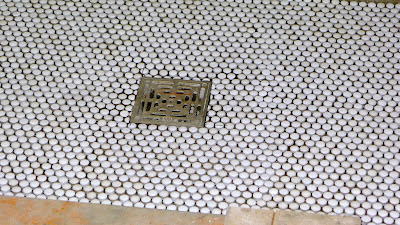 The penny rounds in the shower basin (mix of gloss and matte, quite lovely).

One of the things Keith called us about the other day (or was that just yesterday?) was the grout. They were going to use a different brand than we'd originally chosen, and would I come over to pick a colour? There were several light greys and off-whites to choose from, but none were quite like the original Mapei "Frost." Keith said, no problem, we'll find the Mapei Frost (he went out himself and bought it)...and it looks perfect!

At the risk of sounding like an advertising cliché, the thing about Keith is that he does not compromise. With every little detail, he has made sure we get what we want. And we are so happy with everything!

I keep shaking my head, having a hard time believing that all this is happening so fast.

..AND, so beautifully. I LOVE the little bathroom tile--I have always liked those penny tiles you find in old bathrooms.

The thing is, you have not only rescued an old, run-down house, but you have modernized it without compromising its original beauty and liveability. You both have created a new classic. It will be the gem of the block.

Will you invite the neighbours in to see--maybe an open house? They will be THRILLED with the transformation, and will forget all the late night noise and traffic.

I am so proud of you both for your incredible taste, decision-making speed, and sheer courage in undertaking such a task. However, the adage: "If a thing is worth doing, it's worth doing well" absolutely applies to you two. You have created a dream home for life.

This will be a wonderful home of memories for Fifi and Katie.