Getting down to the wire.

Another move tomorrow! But this time it's into our own home! So exciting! But boy, do the guys have a lot to do today!

Here's some of the last-minute things they were doing over the weekend. 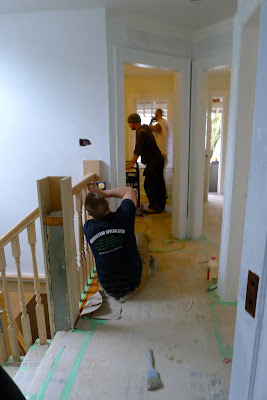 Finishing off the new stairway (they're restoring it to original but the banister had to be raised to get it to code). 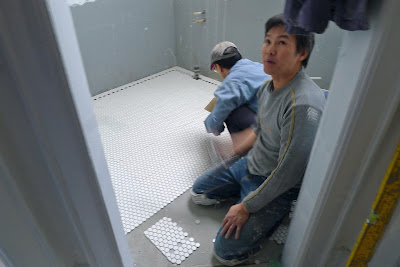 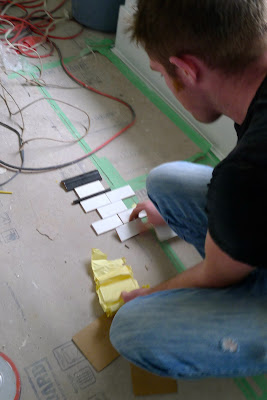 Keith and I figuring out the tile border for the upstairs bathrooms. 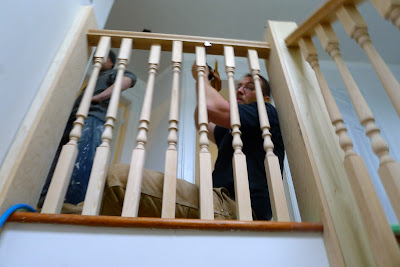 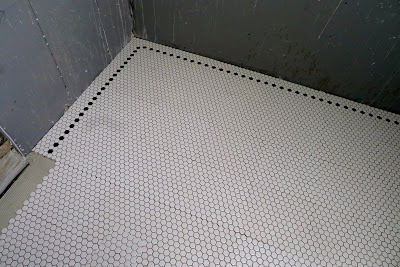 SO pleased with the tile. (This is one of the examples of how awesome Keith is: I had asked for the border to be three tiles out from the wall, with black tiles every second tile. When they were about to lay it that way, he called to say, now that it's going in, it looks like four tiles out from the wall might be better because of wall overlap, etc. Not only was he spot-on, but he didn't just "do what the client asked," but, rather, knew what look I wanted and when the actual work was happening thought how the look was best achieved.) 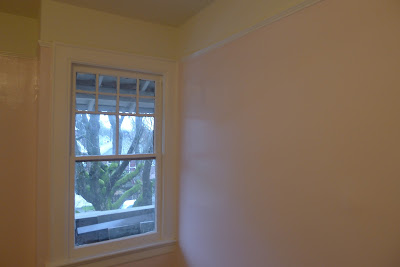 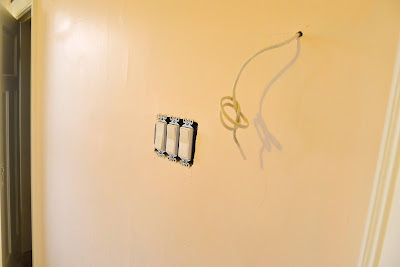 Oooh! Light switches going in! Making it seem real. A lot of them even work! 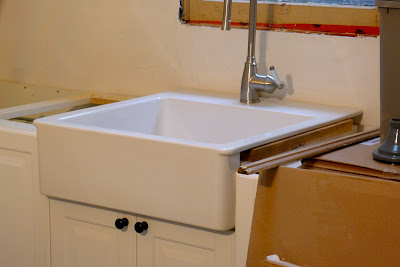 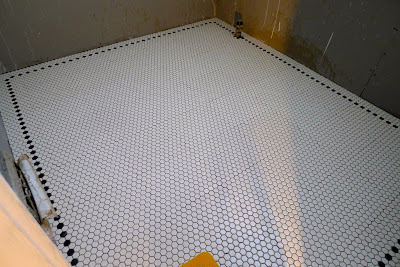 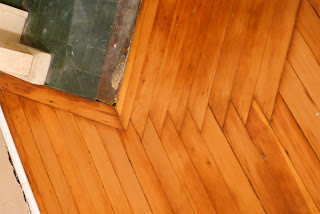 The floor reveal in the dining room! We had no idea this detail was there! 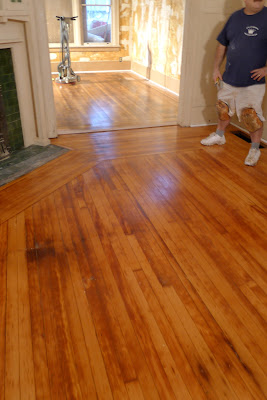 Fir in the dining room, white oak in the living room. 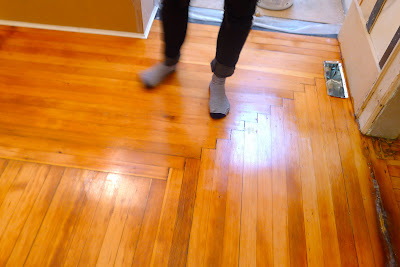 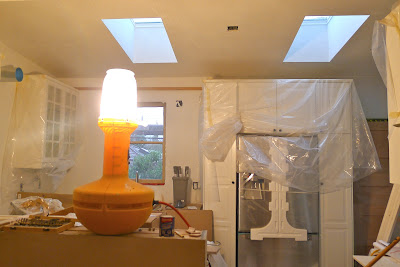 Fridge in place (girls excited: water and ice in door! Mom excited: a luxury fridge instead of the ancient, apartment-sized one we lived with the last 12 years!) 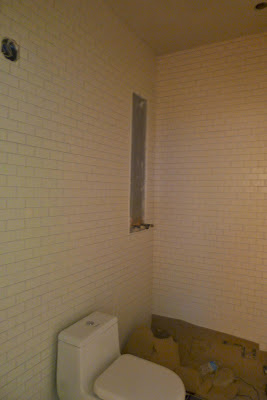 Toilet in d/s bath! Plumber I'd never seen before was putting this in, and looked up at me as I passed and said "where'd ya get this toilet from?!" Um, it's German I think, I said. "It's strange; complicated" he said. Oh dear. Well, at least it's cute, and, surprise! Stylewise, it matches the sink! 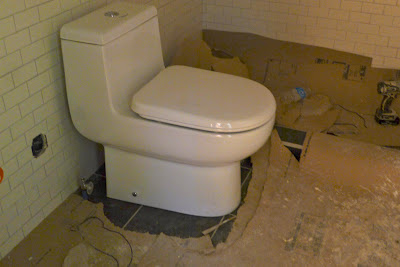 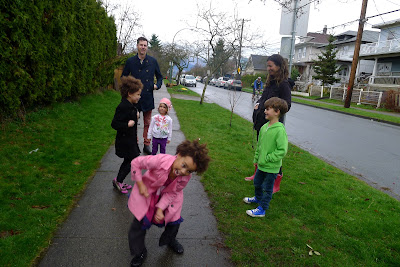 Honey (Michelle), Ogie (Jody), Baby Noah and the Little One came to visit! It felt like a real endorsement to have them so enthusiastic and positive about all our choices!  Huge step in making it feel like home. 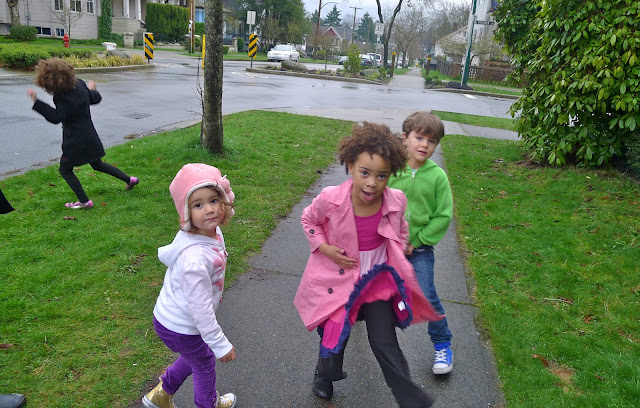 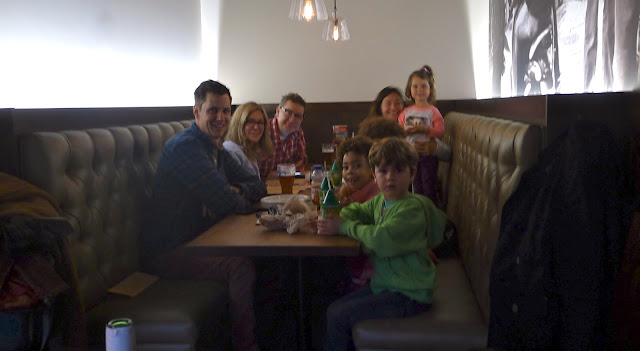 And a fun dinner out at family-friendly Famoso. 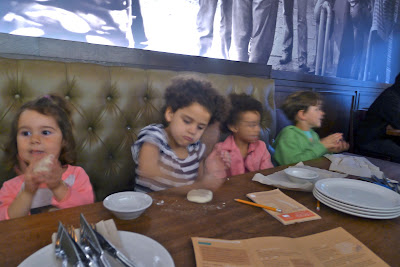 Instead of colouring sheets and crayons, they give the kids balls of pizza dough to play with. Great idea! They loved it! 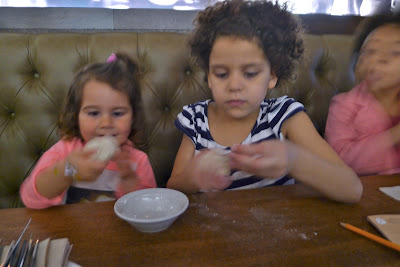 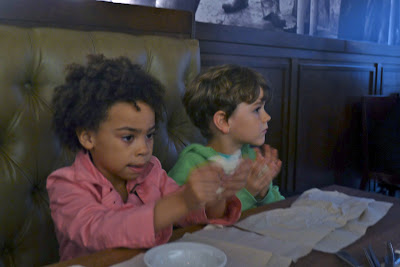 Noah mesmerized by sports on the TV. 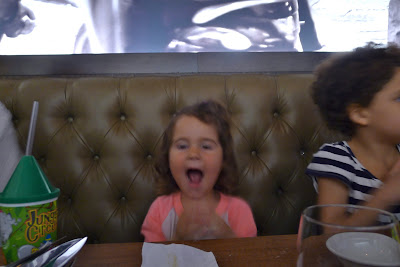 Cleo apparently has a loose tooth, even though she's barely got her baby teeth in! 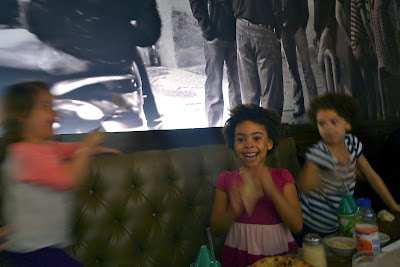 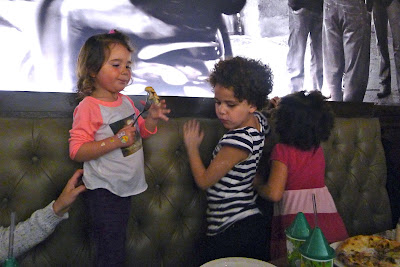 Soooo happy for you all!! I am sure moving in day will be as exciting and as adventurous as every other day so far!! Your house looks GLORIOUS!!!

Yes, Yes. The house is fabulous. Can hardly wait to see it for ourselves.

... and, yes, yes, keep on blogging about your new life in the new house.

Everything is looking so amazing! Seeing you guys with M,J,N,&C made me miss you all more than ever. I'm looking forward to seeing pics of you guys all settled in with your new furniture and rugs. Re: fridge - you will wonder how you ever lived without a water and ice dispenser lol.
Sue